What is the “Polar Vortex” and How Can It Cost Your Business Money?

The phenomenon of a “polar vortex” is something energy professionals continue to investigate. The past few years of mild weather have increased this curiosity as we prepare for the next one. A polar vortex is one of the natural occurrences that can have a direct impact on energy prices. While drastic weather shifts are something we have little control over, we can prepare by learning how they affect natural gas market rates.

Having a better understanding of how energy markets work could allow consumers to make better choices when locking in a fixed price.

What is the Polar Vortex?

First, let us more clearly define the term polar vortex. The Earth is comprised of two poles: the North Pole and the South Pole. For the United States (and the Northern Hemisphere), a polar vortex occurs when there is a very significant, upper-level, low-pressure zone at the earth’s Northern Pole that makes its way further south. This low-pressure zone rotates counter-clockwise and strengthens in the winter as it comes in contact with the warmer, moist air mass further south. 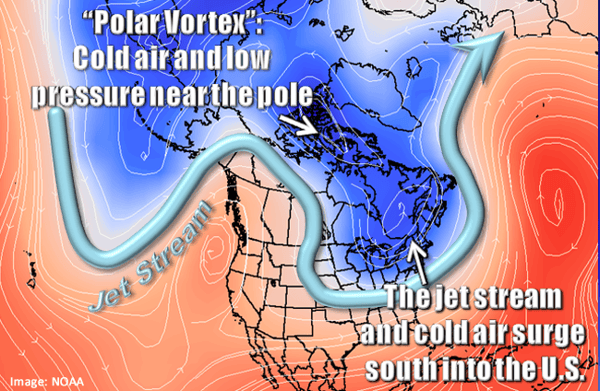 The National Weather Service explains: “Many times during winter in the northern hemisphere, the polar vortex will expand, sending cold air southward with the jet stream (see graphic above). This occurs fairly regularly during wintertime and is often associated with large outbreaks of Arctic air in the United States. The one that occurred January 2014 is similar to many other cold outbreaks that have occurred in the past, including several notable colder outbreaks in 1977, 1982, 1985 and 1989.” (Source: https://www.weather.gov/safety/cold-polar-vortex)

What does the Polar Vortex do to energy prices?

If you experienced the 2014 polar vortex, you are aware that it affected much more than the climate. The effects caused both natural gas and electric prices to spike significantly. Naturally, as the weather became much colder, there was a drastic increase in demand for heating fuels. This increase in demand caused an increase in prices.

The polar vortex of 2014 caused electricity demands on the PJM Power Grid (serving Pennsylvania, New Jersey, Maryland and others) to increase by 25% over standard usage for that particular time of year. The event also pushed natural gas to run up to $125/dth (normally $6/dth).

Nobody want to pay those crazy rates for their energy, especially on the coldest winter days when you’re using the most energy. The best way to protect yourself is to lock in your energy rates at a reasonable price. A qualified energy provider can help you to determine the best time to lock in your prices.